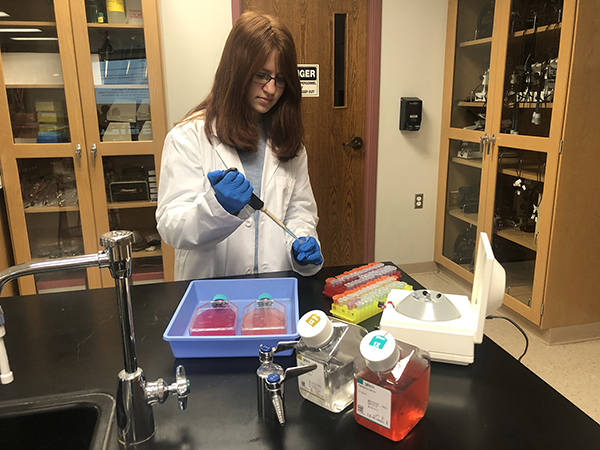 MMI Preparatory School sophomore Rachael Betz earned a First Award and perfect score and was recognized with an Excellence Award in Microbiology at the Pennsylvania Junior Academy of Science (PJAS) Regional Competition at Wilkes University on Feb. 29 after receiving MMI’s 2019-2020 Science National Honor Society grant that she used to fund her research project on the respiratory distress caused by vaping.

The grant funding is part of a new program established by the MMI Science National Honor Society and the MMI Science Department that is available to all current MMI students who are interested in securing funding for large-scale PJAS or Open House projects. The sources of the funding of this grant program include an annual private donation from MMI alum Rich Abrams’ 88 and the membership fees and fundraising initiatives of the Science National Honor Society.

Betz, the daughter of Dr. Amy Houm of Tamaqua and Richard Betz of Honesdale, used the grant to study a condition that is currently affecting individuals who inhale atomized vape oil using e-cigarettes or Juul devices. The condition, which can lead to severe lung injury or even death, is still not widely understood but appears to be linked to damage of alveolar defensive cells. Alveolar (within the sacs of the lungs) macrophages (which literally means “large-eaters”) are immune system cells that “focus on clearing the air spaces of infectious, toxic, or allergic particles that have passed mechanical defense components of the respiratory tract, such as the nasal passages, the glottis, and the mucociliary transport system.” Healthy macrophages ensure the overall health of our respiratory system and are critical for optimal respiratory function. Distressed macrophages appear to consume the atomized oil during vaping. The oil, which is basically vegetable glycerin and propylene glycol, overwhelms the macrophages and suppresses normal immune function.

“The MMI Science Department pushes the limits and continually excels at fulfilling our junior scientist’s endeavors. Our students are using technology and engaging in experimentation which is traditionally only encountered in post-secondary educational programs,” Mele said. “Culturing mammalian cells is no easy task and requires specific instruments, like CO2 injection incubators, and precise measuring and quantification techniques. Although our lab doesn’t currently have a CO2 injection chamber, we designed microenvironments using a small-scale ad hoc CO2 diffuser and an array of stabilizing buffers to offset changes in pH. Last year, the MMI purchased a Vernier UV-VIS spectrophotometer that detect molecules that absorb light in the UV range, where many of Rachael’s molecules exist. The technology helped her show a potential scenario of how vaping affects alveolar macrophages. Rachael’s work has shed incredible insight into the respiratory condition brought about by vaping and produced a stellar PJAS project.” The Vernier UV-VIS spectrophotometer used in this project was partially funded through a 2018 ExxonMobil Educational Alliance grant from Liberty Petroleum Distributors.

Other students who are interested in securing funding for large-scale PJAS or Open House projects are encouraged to contact Mr. Mele for more information.

For 140 years, MMI Preparatory School has been providing dedicated area students with a comprehensive and inspiring 6th through 12th grade college preparatory program that maximizes each individual’s academic, social, and character potential in preparation for success in college and beyond. The school is accredited by the Middle States Association of Colleges and Schools Commissions on Elementary and Secondary Schools (MSA-CESS).  MMI is a school where every student can reach their full potential: academically, ethically, and socially. For more information about MMI Preparatory School, visit www.mmiprep.org or call 570-636-1108.