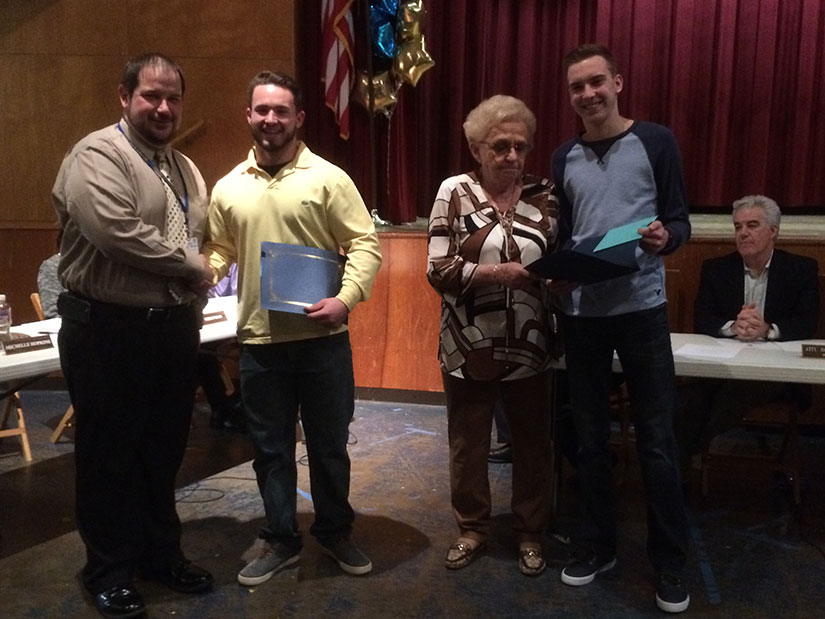 On Tuesday February 20th the school directors and Mr. Chris Gatto High School principal took  the opportunity to recognize seniors Brendan Mozeleski and Brandon Nee.  Brendan and Brandon, with the help of Mr. McGloin, produced an Anti-Opiod public Service Announcement video that was submitted to Lackawanna County’s “Say Yes to Life!” competition.  In 2015 in Lackawanna County, 69 people died of overdoses most of which were attributed to opioids. Opioids are drugs that act on the nervous system to relieve pain. These include the illegal drug of heroin, as well as legally prescribed drugs such as oxycodone (OxyContin®), hydrocodone (Vicodin®), codeine, morphine, fentanyl, and many others. These drugs are highly addictive and when misused or abused can lead to death.

Commissioner Laureen A. Cummings has spearheaded a public awareness campaign surrounding this issue and has conducted several community programs to discuss the dangers. She and her colleagues, Commissioners Patrick M. O’Malley and Jerry Notarianni, are committed to ending the opioid epidemic in the County. This contest is a way to educate the public about the dangers of opioid use and its debilitating effects on our youth.

Brendan’s and Brandon’s submission was selected as the winner in the Judge’s Choice Category – under 18 years of age.  They will be presented with an award at the commissioner’s meeting on March 1st at 10:30 am.  Aside from their filming abilities, Brandon is president of the peer mediation team and a member of the Science/Math Club and Blue and Gold Chapter of the National Honor Society. He is also a member of the Blue Devils golf and basketball teams.  Brandon has been accepted to King’s College and the University of Scranton and plans on majoring in Accounting.  Brendan is a member of the Blue Devils football and baseball teams.  He was named a Class A All State running back this past season.  Brendan has been accepted to King’s College and Marywood University and plans on majoring in Business Administration.  We congratulate Brendan and his parents, Kathie and Dan Mozeleski, and Brandon and his parents, Vanessa and Shawn Nee.