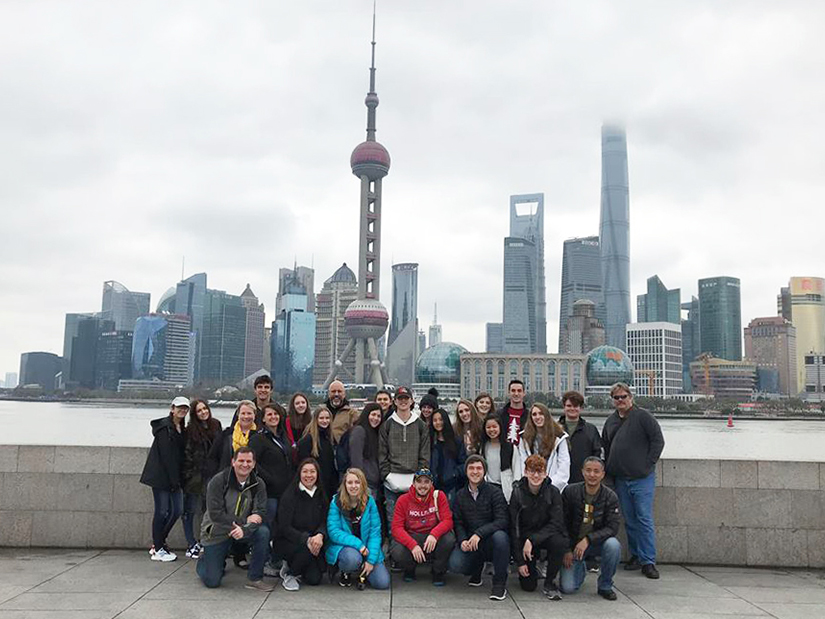 Upon arriving in Beijing, students met with their tour director, Zhang, who accompanied them and taught them about the history and culture of China and its people. He also shared information about each of the sights they encountered.

“I’m glad that we were able to provide the opportunity to the students to expand their horizons and step outside their comfort zone to experience the Chinese culture, language, and history,” MMI Director of Technology and trip organizer T.R. Laputka said. “It was an enormously fulfilling trip for everyone involved – not only educationally but also personally, since most people only see these sights in pictures. The encounters and memories made, things learned, places seen, and food tasted will be remembered for a lifetime.”

On Saturday, March 9, they visited the Temple of Heaven in Beijing and learned about the location where the Chinese emperors prayed to Heaven for a good harvest. They walked along Tiananmen Square to the Forbidden City to learn about the palace of the emperor. For dinner that evening they had Peking duck, a local delicacy. After dinner, some students went to the Legend of Kung Fu show, which told the story of a young boy in his pursuit of becoming a Kung Fu master and the obstacles that he encountered along the way.

After raveling to Badaling, students walked along the Great Wall of China and hiked to the guard tower at the top of the mountain and had a traditional Chinese lunch. This was followed by a tea ceremony, where the group learned about the importance of tea in China, experienced the different properties of Chinese teas, and sampled different kinds of teas. Then, they took a rickshaw tour to a local family residence, where they had dinner and learned about city life in Beijing.

On Monday, March 11, they visited the Emperor’s Summer Palace on Kunming Lake and had a lesson in the practice of Tai Chi. The group then boarded a plane to Xi’an, where they viewed the sights from individual bicycles on the city wall. After dinner, the group enjoyed a reflexology massage, where they learned about Chinese concepts of acupressure therapy.

The following morning, they visited the Terra Cotta Warriors museum, where they experienced the 2,000-year-old sculptured soldiers of Emperor Qin Shi Huang, China’s first emperor. The group learned about the archeological history and recovery process of this historical site. After they came back to Xi’an, they visited a small museum and saw modern art paintings depicting Chinese culture and then went to a calligraphy class so they could practice writing Chinese and their names with Chinese brushes. Then, they walked along Beiyuanmen Street to sample various Muslim foods. After dinner, some of the group went to see the Tang Dynasty Show.

When the group arrived in Shanghai on Wednesday, March 13, they traveled to the 100th floor of the World Financial Center and shared spectacular views of the city. They went shopping on the famous Nanjing Road and, after a specialized dinner of a variety of Chinese dumplings, they enjoyed an acrobatics show.

On Thursday, March 14, the group toured the Jade Buddha Temple, where they learned the history of Buddhism and saw many different representations of the Buddhist forms. This was followed by a tour of a silk factory, where they experienced an interactive tour of the silk-making process.

The afternoon included a walk on the waterfront and a tour of the Yu Garden. An MMI alumnus joined the group for dinner to share his experiences in China. He also accompanied them on a nighttime Huangpu River cruise to enjoy the spectacular nighttime skyline of Shanghai.

The group bid farewell to China and returned to the United States on Friday, March 15.

MMI Acting Head of School Dr. William Shergalis, Ph.D., said, “In today’s world, it is important for students to have an international experience.  Our education at MMI does not just encompass learning words and symbols; we hope to provide opportunities for students to immerse themselves in culture and language. These trips abroad, while fun and exciting, also provide a depth of understanding that is a compliment to a student’s classroom instruction.”

CAPTION: Twenty MMI Preparatory School students, four faculty and staff members, and two parents visited Beijing, Xi’an, and Shanghai during a nine-day educational tour of China. In the photo, the group poses along The Bund, a waterfront in central Shanghai.