The students learned about leadership, state and local government and civic participation. Participants are among the best and brightest of Pennsylvania’s future leaders.

Charles Seidel, MMI Assistant Head of School, said, “Garrett is actively engaged in a number of activities both inside and outside of school. We’re proud to celebrate the accomplishments of all of our students. It’s great to see students working toward the betterment of themselves and their communities.”

This year’s attendance was the largest in more than a decade. The program is free to participants, who receive a sponsorship from their local American Legion Post. 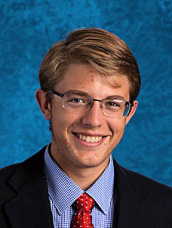