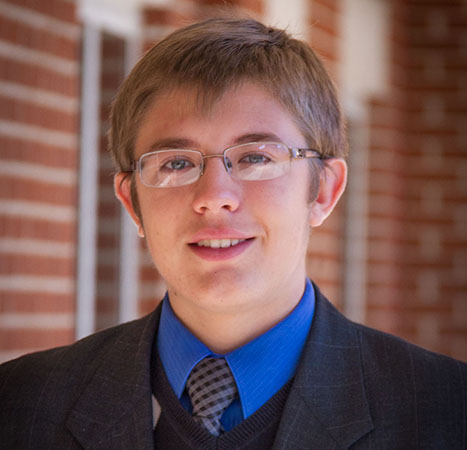 (Freeland, PA – November 19, 2014) – MMI Preparatory School sophomore Garrett Kost was chosen as this year’s MMI recipient of the Prudential Spirit of Community Award, a nationwide program that recognizes middle level and high school students for volunteer work in their communities.

Kost is the son of Joseph and Natalie Kost of Freeland. He was chosen as MMI’s Local Honoree based upon his essay, his dedication to the cause for which he volunteered and his passion for volunteering in his community. He will receive a Certificate of Achievement and his essay advances to competition at the state level.

Kost is a volunteer with Eckley Miners’ Village, where he interprets history to visitors of Eckley’s events throughout the year, dressing in period miner’s clothing and demonstrating to visitors how miners lived and mined the coal that made their daily living. He and his parents also cultivate a period-correct garden for Eckley’s visitors to see

In his essay, Kost wrote, “Without showing visitors their local history, they would have no clue about prior life that our ancestors had to struggle with to get to where we are now. … Without volunteers, the historic site of Eckley would not be able to operate. … Putting on clothes and acting seems like easy tasks, but it is not. It is much more than a costume, it is researched clothing that may also have to be reproduced. Everything I do and say to the public needs to be researched by myself to make sure everything is as accurate as possible.”

“Through volunteering, I learned a lot, not only about history, but about myself and how much I am willing to do if I put my mind to it. I gained multiple skills such as public speaking, working with wood to restore houses and sheds, and how to plant multiple vegetables and plants. The most memorable part of this was being awarded the volunteer of the year award when I went to Harrisburg and received a pin and certificate along with my parents,” he wrote.

An independent judging organization names the top middle level and high school volunteer in each state and Washington, D.C. Results are announced in early February, when 102 State Honorees and 234 Distinguished Finalists are named. Then, 10 National Honorees (five high school students and five middle school students) are chosen by a panel of prominent public figures and announced at a special ceremony in Washington, D.C., in May.

The Prudential Spirit of Community Awards program is the United States’ largest youth recognition program based exclusively on volunteer community service. The program was created in 1995 by Prudential in partnership with the National Association of Secondary School Principals (NASSP) to honor middle level and high school students for outstanding service to others at the local, state, and national level.

The program’s goals are to applaud young people who already are making a positive difference in their towns and neighborhoods, and to inspire others to think about how they might contribute to their communities. Over the past 19 years, more than 370,000 young Americans have participated in the program, and more than 100,000 of them have been officially recognized for their volunteer efforts.