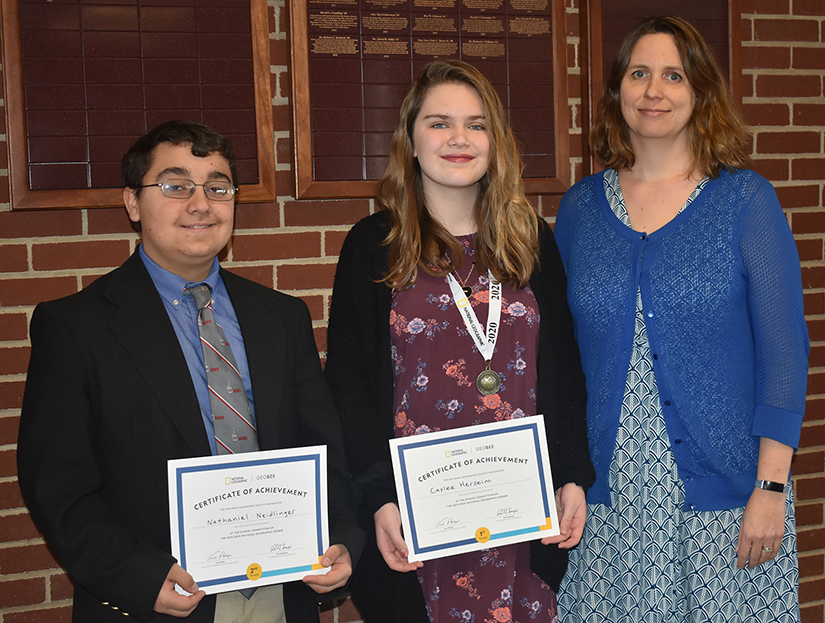 Eighth grade student Caylee Herseim won first place in MMI’s school competition of the National Geographic GeoBee and will move on to compete for the chance to represent MMI in the Pennsylvania State GeoBee. Fellow eighth grader Nathaniel Neidlinger was the runner-up in the contest.

Herseim is the daughter of Jeremy and Casey Herseim of Hazle Township and Neidlinger is the son of Amanda Neidlinger of Weatherly.

The school competition is the first round in the annual National Geographic GeoBee, a geography competition designed to inspire and reward students’ curiosity about the world. Questions cover not only geography, but also ancient and world civilizations, cultures, and physical features.

Herseim and other school champions will take an online qualifying test. Up to 100 of the top test scorers in each state will become eligible to compete in the State GeoBee. The winners of the state GeoBees receive an all-expenses-paid trip to participate in the GeoBee national championship, which will be held in the spring.

The National Geographic Society is a global nonprofit organization that uses the power of science, exploration, education, and storytelling to illuminate the wonder of the world, define critical challenges, and catalyze action to protect our planet. The organization developed the GeoBee for students in fourth through eighth grades in 1989 in response to concern about the lack of geographic knowledge among young people in the United States. Over more than three decades, more than 120 million students have learned about the world through participation in the GeoBee.

For 140 years, MMI Preparatory School has been providing dedicated area students with a comprehensive and inspiring 6th through 12th grade college preparatory program that maximizes each individual’s academic, social, and character potential in preparation for success in college and beyond. The school is accredited by the Middle States Association of Colleges and Schools Commissions on Elementary and Secondary Schools (MSA-CESS).  MMI is a school where every student can reach their full potential: academically, ethically, and socially. For more information about MMI Preparatory School, visit www.mmiprep.org or call 570-636-1108.