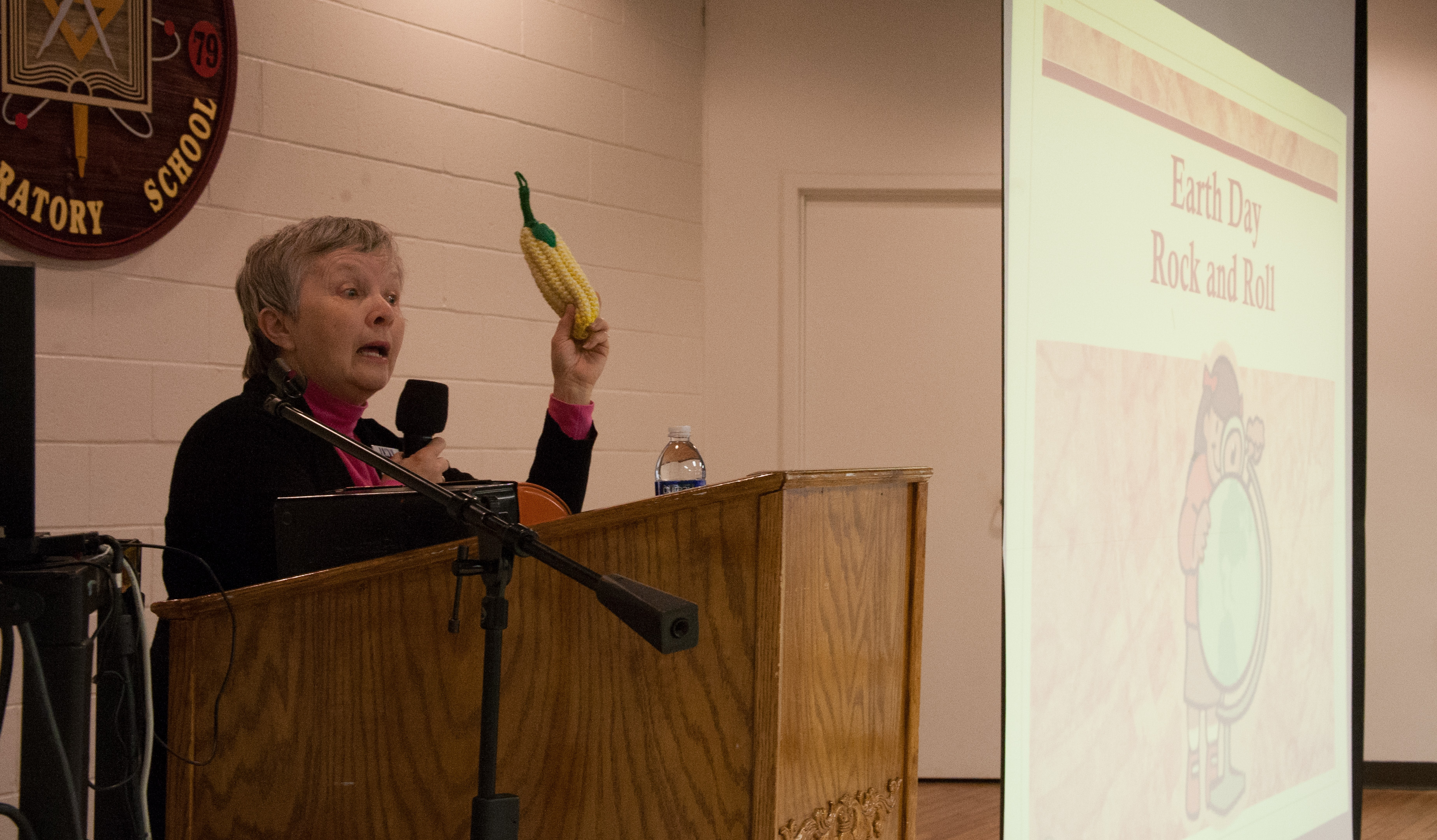 (Freeland, PA – April 23, 2015) – MMI Preparatory School’s eighth grade class recently completed a lesson on shale and had an opportunity to celebrate Earth Day with a presentation on the subject from a state expert.

Dr. Roberta Winters, the former Vice President for Issues and Action on the State Board of the League of Women Voters of Pennsylvania (LWVPA), presented a program to MMI eighth, 11th and 12th grade classes on Wednesday at MMI educating students about Marcellus Shale and the extraction process called hydraulic fracturing, commonly referred to as “fracking.”

Her presentation was made possible through the League of Women Voters of Greater Hazleton and partially funded by the PPL Corporation through support the league received from the PPL Foundation.

Winters coordinated the Marcellus Shale Natural Gas Extraction Study Guides for the LWVPA and chaired the study group that recently completed the addenda to these guides on pipelines and pooling. Her presentation provided an overview of the study and highlighted current news and research.

She discussed the potential of the sedimentary Marcellus Shale formation, which has been buried underground for eons, as an abundant source of natural gas and explained the extraction process and how the men, money, and machines pouring into Pennsylvania aid the natural gas operations. Winters also detailed how the LWVPA’s year-long study addressed the economic, public health, and environmental impact of that industrialization and summarized the evolving issues of permitting, regulation, and taxation of natural gas operations from Marcellus Shale.

Winters served as the Vice President of Issues and Action from June 2011-2013. In her leadership capacity, she was a League representative on the statewide Citizens Marcellus Shale Commission. In her voluntary role with the League, she has worked to help educate the citizens of Pennsylvania and LWV members in neighboring states regarding the evolving opportunities and challenges of natural gas extraction, production, and transmission.

Winters retired from her elementary school teaching position in the Radnor Township School District in 2006. Her educational background includes a B.S. in Biology from Bucknell University, an M.A.T. in Science Education from Harvard University, and an Ed.D. in Educational Leadership from the University of Pennsylvania.

For over 130 years, MMI Preparatory School has been providing dedicated area students with a comprehensive and inspiring 6th through 12th grade college preparatory program that maximizes each individual’s academic, social and character potential in preparation for success in college and beyond. The school is accredited by the Middle States Association of Colleges and Schools Commissions on Elementary and Secondary Schools (MSA-CESS).  MMI is a school where every student can reach their full potential: academically, ethically and socially.  For more information about MMI Preparatory School, visit www.mmiprep.org or call 570-636-1108.

PICTURE:  Dr. Roberta Winters, the former Vice President for Issues and Action on the State Board of the League of Women Voters of Pennsylvania (LWVPA), speaks to MMI Preparatory School students during an Earth Day presentation at the school.