A senior at Shenandoah Valley High School, was selected to become the school’s recipient of the Delin Award. 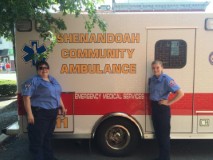 Sara Hixson, a senior at Shenandoah Valley High School, was selected to become the school’s recipient of the Delin Award. This award is presented to a student who has engaged in some activity that addresses issues associated with social diversity and initiates measures to remedy such situations.

In her junior year, Sara became a volunteer member of the Shenandoah Ambulance Association. While assisting with ambulance calls, Sara realized that many of the Hispanic patients were unable to comprehend English and answer questions regarding their sickness or injury. To alleviate this problem and facilitate a better understanding between ambulance personnel and the people they transported, Sara with the help of her high school Spanish teachers Shawn Novatka, and Eileen Marchetti, created an English to Spanish Guide that would accompany each ambulance and contain questions that would help provide better care. The guide contained questions that patients would normally be asked but in both Spanish & English. The support given her for this project by teachers, peers, and fellow ambulance volunteers made this a real life collaboration, and enabled Sara to become a worthwhile candidate for the Delin Award, As a result of her selection she was presented a $500 grant and for attending Penn State she would receive an additional $500 to defray her tuition.

Sara who is the daughter of Dwayne & Linda Hixson has been accepted to Penn State Schuylkill Campus and the Schuylkill Health School of Nursing in Pottsville and eventually go on to earn a Bachelor’s degree in Nursing. Shown in photo L-R: Ann Marie Kovelewski Shenandoah Ambulance EMT & Sara Hixson SV Student Volunteer.