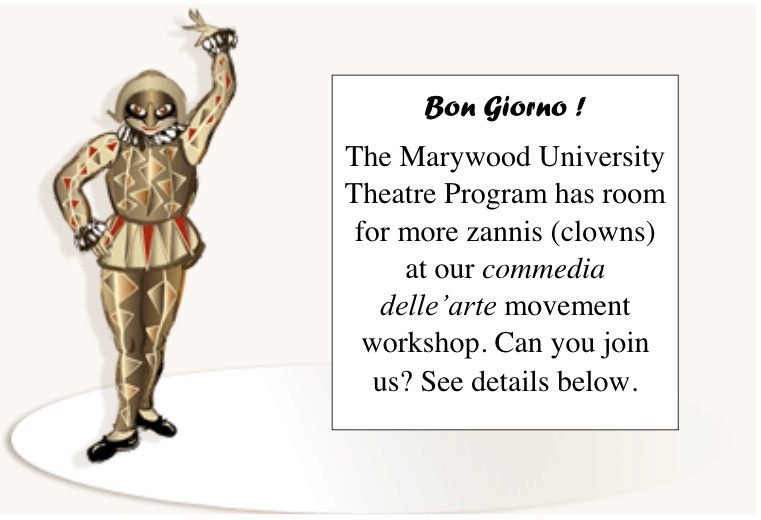 Marywood University’s music, theatre, and dance department will hold theatre workshops and a performance in February. The dates and times of the commedia delle‘arte movement workshops are: Saturdays, February 8 and 15, from 12 – 3 p.m., and 4 – 7 p.m.; Sundays, February 9 and 16, from 11 a.m. – 2 p.m., and 3 – 6 p.m.; with a public performance on Sunday, February 16, at 6 p.m. The performance and the workshops are free and open to the public, and will take place in the Black Box Theatre, in the Sette LaVerghetta Center for Performing Arts. To register for the workshop, please contact Paulette Merchel, Ph.D., at merchel@maryu.marywood.edu, or call (570) 876-8338 by Thursday, February 6.

Commedia delle‘arte was an early form of professional theatre, originating from Italy, that was popular in Europe from the 16th to the 18th century. Also known as “Italian comedy,” Commedia delle’arte was a humorous theatrical presentation performed by professional actors who traveled in troupes throughout Italy. Performances took place on temporary stages, mostly on city streets, but occasionally even in court venues.

For additional information about the Commedia delle‘arte workshops or performance, please visit the music, theatre, and dance department at Marywood University, at www.marywood.edu/mtd/index.html, or call Dr. Paulette Merchel, at (570) 876-8336.