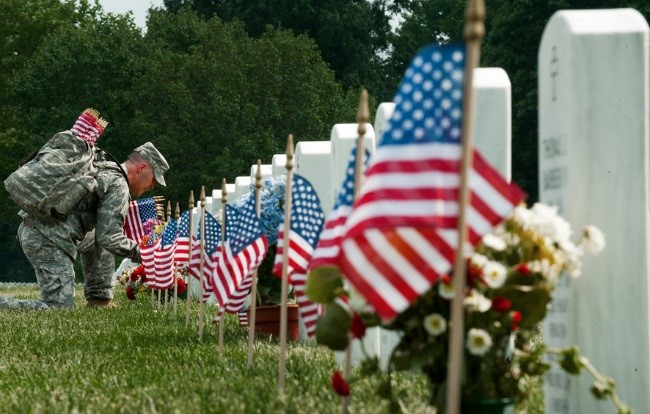 We know we celebrate Memorial Day to commemorate those who have fought and died for our country and that we shouldn’t need a day off work to remind us to be grateful for those who have given their lives so we can continue to live our lives in freedom.  So as we come up on a, (long overdue for most of us), day off work we decided to find out more about the history of Memorial Day.

The GAR, (Grand Army of the Republic), on May 5, 1868, three years after the civil war ended established a “Decoration Day”.  This was designated as a time to decorate the graves of fallen soldiers with flowers.  It was decided it should be on May 30 as flowers would be in bloom all over the country.  Although many areas have claimed to be the first to observe Memorial Day it wasn’t until 1966 when congress and President Johnson declared Waterloo NY the “birthplace” of Memorial Day when they held a celebration on May 5 1866, which consisted of the entire community flying flags, businesses closing and a ceremony honoring those who fought in the Civil War.  It was determined that earlier observances in other areas were not community-wide or too informal or just one time happenings.

Memorial Day ceremonies were being held on May 30 throughout the nation by the end of the 19th Century.  However, it was not until after World War I that the day was expanded to include all who had died in American wars.  In 1971, congress declared Memorial Day a national holiday and placed on the last Monday in May and we continue to celebrate it that way today.

As the last Monday of May approaches, and we are making our plans for our long weekend, don’t forget to take time to remember all those who have given their lives for their country.  These brave men and women deserve much more than our thanks and gratitude, but as that is all we have to offer, we should stop and reflect on what they have given to make our country a great place to live.